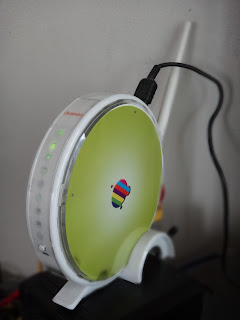 Need a new Wireless Router? I would guess the first brands that come to mind are Linksys, Netgear, maybe even Trendnet? What about Sapido? Never heard? Actually this relatively unknown Taiwanese brand has been getting popular the past couple of years. They have some of the most unusual features and probably the best “bang for your buck” in the router world. They have a wide range of wireless routers but the one that really caught my eye was the GR-1222 Fun Center Wireless Router. It has full Wireless N 300Mbps and what sets it apart is that it has 2 USB ports where you can plug in the following devices:
I found it at Viramall for P3300. I was hoping it would be cheaper, anyway I took a chance. What I wanted to do was to setup my own media, file and print server, setup up an internet webcam so I can watch the kids when I’m away and be able to have a backup 3G internet connection in case my DSL goes down. After extensive online research, so far this Sapido seems like the only one that can do it all. It is after all a complicated setup. Could it be done?
Problem 1. Things get complicated:
Getting the router to work was not a problem. Now to setup the webcam. In order to do this you first need to setup a DNS server with a service like TZO or DYNDNS. Then you need to enable Port Forwarding. However, to do this, you need to setup your modem in bridge mode so that your router (and not your modem) will be the one to dial your ISP. Complicated? YES! It took me a week of research just to get it to work.
Problem 2. Webcam Compatibility
I was using an old Genius webcam with my setup, however the video quality was terrible, I bought another one from CD-R King which did not work. I had to exchange it three times and the last one finally worked. But the video would freeze after a few minutes. Finally, I bought an A4Tech webcam and it finally worked.

Problem 3. USB Drive
I tried using a 8GB flash drive to use for downloading torrents. It recognized the drive but would freeze once downloading started. Again after some research, I learned you have to format it under NTFS.
Problem 4. 3G Modem
Ok, this was the least problematic. All I needed was the APN name. I tried it with my SmartBro and it worked. You can even set the number of minutes after your DSL connection fails before it switches to the 3G modem. Nice!
Problem 5. Print Server
This was the last on my list. It took me a while to figure out that it won’t work on my Mac. At lease not on OS X 10.5 or .6. I have not had the chance to try it on Lion. It works fine on Windows and even on my iPad using the “Printing for iPad app”. I guess OS X just does not support print server from this router.
Ok, this post should have started with geek alert. Am I the only one who wants a setup like this? Perhaps. But after a long and complicated setup I can only recommend this router to those who like to experiment and have time to tinker. If you just want a simple wireless router, then you can save time and money and just buy another model or brand. I guess 4 out of 5 is not bad. My only worry now is if this router breaks I’m not sure I have the time and patience to set it up all over again.
The Good:
- Price
- Features
The Bad:
- Tech Support (FAQs not helpful and no reply to my emails)
- Complicated setup to use all the features
Posted by Techamuna at 6:16 PM